My sister’s voice sounded panicky on the other end of the phone. “You’ve got to help me, Max,” she said.

“My cat attacked me.” 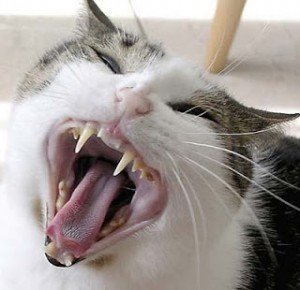 Frankly, I didn’t see why that was such a big deal. My cat attacks me all the time. I’ve come to accept it as normal cat behavior, like coughing up hairballs, and bringing headless rodents into the living room while we are entertaining guests. It’s the ongoing effect of a jungle curse that came upon me some thirty years ago when I accidentally killed some African violets. Since then, flora and fauna of all kinds have wrought havoc on our household. My cat, Sophie, is merely the latest instrument of vengeance, a veritable “Cat of Monte Cristo.” Why would my sister’s cat be any different?

Alice continued. “I closed my patio door,” she sobbed, “and the cat jumped up and grabbed my hand …” She then described a titanic struggle for survival in which she had flung the hissing and spitting cat, across the room, then had run bleeding into the bathroom where she remained for nearly an hour, held hostage by a growling feline menace. When the cat finally stopped pacing outside the bathroom, Alice made a dash for the garage door and to safety.  She was calling from exile at our mother’s house.

I told her I would meet her at home and transport the cat to the humane society.

Since my wife, Judy, was away at a retreat I borrowed a car from Arnie, one of the guys that lives with us and headed for my sister’s place. Thus I set out to add another truism to the list of  “Max’s Maxims,” namely, “Good judgment comes from experience. Experience comes from bad judgment.”

The cat, a longhaired Siamese-looking beast, was waiting as I opened the door. It studied me through innocent cat eyes, undoubtedly wondering why I was there instead of Alice. “Here, kitty.” I soothed. “C’mon, Jojo…” The cat looked pretty docile to me so I stooped and picked it up. So far so good.

I headed for the garage where Alice was waiting with a large box. I was about to assure her that all was well in the wild kingdom when Jojo stiffened, hissed and suddenly became all teeth and claws. Alice’s eyes widened in terror and she fled to the front yard leaving me with a cardboard box, flaps folded tightly inside, and handful of snarling furball. For the next few moments I struggled to loosen the box flaps, with one hand while trying to contain a mutinous cat with the other. At length, as I attempted to close the lid, Jojo broke free and darted back into the house.

An hour and several band-aids later, I left my sister’s house with the cat imprisoned in a plastic clothes hamper strapped with duct tape. The Humane Society was closed so I would be keeping Jojo overnight so Alice wouldn’t have to sleep on the porch.

The following morning, Arnie needed his car, so I asked Madeline, who also lives with us, if I could borrow hers. She was reluctant because she keeps a tidy car, whereas I clean mine with a shovel, moreover she needed it back in an hour. I assured her I would be careful and that I wouldn’t be long, so with the duct-taped hamper in Madeline’s hatchback I prepared to rid myself of “psycho-kitty.” Part way there, it occurred to me that handing the Humane Society a suffocated cat was probably not a good idea so I stopped and loosened the duct tape to make sure there was enough air.

I placed the clothes hamper on the counter.

“A cat.” I said. “My sister is terrified of it. They got in a fight last night and she won’t stay in the same house with it.”

She eyed me suspiciously. “Has it ever bitten anyone and drawn blood?”

Was she kidding? “Oh, yeah,” I replied, “this cat gives carnivores, a bad name.”

“I’m sorry,” countered the woman at the counter, “we can’t take it, then. It needs to be quarantined for ten days.”

I started to argue, but it was clear it wasn’t going to do any good. Annoyed, I marched, hamper and cat in hand, back out to the car. Now what? I thought, as I opened the hatch on Madeline’s hatchback. Alice wasn’t going to take the cat back. I certainly couldn’t keep it for ten days. Irritably, I plopped the hamper into the car. Just then, the loosened duct tape let go and the cat exploded out of the hamper like a furry missile and crouched, hissing, on the dashboard while a cloud of long cat hair settled over the upholstery of Madeline’s once spotless car. I slammed the hatch down.

From the dashboard the beast seemed to sense its advantage. It was inside and I was outside needing to get home within an hour. Between me and home was ten minutes in the same vehicle with “Kitty Cujo.”

Next Episode: The Curse of the Cat People