Episode II: The Curse of the Cat People

Last Time: Max, proving once again that no good deed goes unpunished, valiantly offers to rescue his sister, Alice, from the vicious assault of her cat. After a bloody struggle, he borrows a car to take the snarling animal to the humane society. When asked if the cat has bitten anyone and drawn blood, Max foolishly admits that it has, and is sent on his way, cat in hand. While reloading it into the hatchback, Jojo, the cat, bursts from its container and crouches, growling, on the dashboard. Now, Max faces his greatest challenge: he must drive home in the same vehicle with “Kitty Cujo.”  Our story continues…

The beast seemed to sense its advantage. It was inside and I was outside needing to get Madeline’s car back to her within the hour. I had no choice but to get in and take my chances. First, though, I would need to intimidate Jojo to the back of the car.

Remembering an article about lion behavior in National Geographic, I tried to assume the posture of a “dominant male.” I affected a snarl while arching my back and pacing. I caught a glimpse of my reflection in the car window—a hunchback with acid reflux looking for a place to belch. Moreover, I was attracting a crowd of curious onlookers. I changed strategy.

“BOO!” I yelled at the car. The cat retreated, sulking. 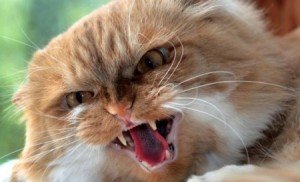 At home, Madeline was waiting. She watched as I chased Jojo around in her car, long cat hair settling like furry snow, on the upholstery. Eventually, I got him into a plastic clothes hamper and gave Madeline her wheels.

An hour later, I was back on the road, this time in Barney’s car, a tired, old, Ford with broken turn signals. With the hamper in the back, I was driving toward a place that would agree to quarantine “psycho-kitty.”

On the way, I rechecked the address on a list of animal shelters that I had gotten at the humane society. The address was right next to its business hours:

I slammed on the breaks and pulled over. In the silence of the car I distinctly heard Jojo snickering from the clothes hamper.

In panic, I scanned the list. There had to be an open shelter somewhere. There was…20 miles north. I was beginning to feel like Don Quixote on a quest.

“Well,” said the attendant as I set the plastic hamper on the counter, “what have we here?”

She looked at me suspiciously. “Has it ever bitten anyone and drawn blood?”

Now, I’m an honest guy. If I weren’t, “hellcat” would have been in some vacant lot hunting rodents by now, but when the lady at the counter asked about the biting and the blood, all I could think of was having to take it home again. I wanted to be free of this feline albatross.

“Is this your cat?” queried the attendant.

That, I could answer truthfully. “No, it’s my sister’s.”

“Do you have a note from her?”

I felt like the cat’s claws were around my neck. “Er…no…”

“I’m sorry,” the attendant said, “we can’t take it unless we have a signed letter from the owner.”

Suddenly, I knew what purgatory was. Not flames and sulfur, but trapped in a dance of death with the housecat from hell. Desperately, I urged her to call my sister, which she did. Alice wasn’t home.

Minutes later I was outside. I knew Jojo was laughing from the clothes hamper in the back seat. I began to rummage through Barney’s car looking for a pen and paper. If they needed a note from Alice then “Honest Max” was going to give them a note—now! I came up with a dried out Bic and a Starbucks napkin.

After forty-five minutes of cruising, I was at “Hank’s Convenient Store” tossing a steno-pad and a pen on the counter. I opened my wallet. It was empty. The dance of death continued. I could hear Jojo laughing from the parking lot.

I looked beseechingly at the cashier. “Do you need an attack cat to guard your store?” It was a long shot, but worth a try. He didn’t, but offered me a piece of paper and a stubby pencil with which I scribbled a “note from my sister.”

The lady at the shelter took my note and the cat, no questions asked. I left with my plastic hamper and my injured integrity.

At home I settled onto the sofa thinking I was a free man. The newest National Geographic had come in the mail that day. I tore open the wrapper. There were cats on the cover. It was an omen—the curse of the cat people. Two days later Alice called with the news. A stray cat had appeared on her patio and given birth to six kittens under her chaise lounge.

I could hear Jojo laughing…