Read Between the Worlds Podcast

Where we talk about reading and writing until kingdom come. Self-publishing for the curious.

This is the first Read Between the Worlds audiobook episode of Sword of Submission – Reclaiming the Power of Being Human by Dan and Jody Mayhew. We will be releasing chapters as soon as we can get them produced (meaning as soon as we can record and engineer them. Hopefully, we will be able to keep them coming every few days until the whole book is available.

From the back Cover:

The Bible is an epic story of revolution…

It tells of the liberation of an enslaved people. It is the tale of a hero who emerges to face the fury of an army of supernatural beings. The victory depends on  the willingness of the slaves to become allies with their Creator.

Or are each of us caught up in an invisible war that broke out in another dimension? A war that, even now, is being fought across the battlefield of time and space. The prize? A seamless creation; a multi-dimensional universe no longer divided, but brought together—everything in time and eternity submitted to  one ruler, a hero called “The Seed.”

Sword of Submission uncovers the story of a rebel army defeated in the eternal realm, and of the liberation of a race once captive in time and space. In the end, it is the story of a joyous victory won because of the most powerful weapon in the universe…

A wide-angle look at the battlefield that spans the our world and the heavenly places. What is at stake in this invisible war?

[The forces of darkness] had underestimated the power of the Creator again, not knowing that He had made a place for Himself in the time/space world at the moment He had created it. He had created the earth from the inside out.

The voice of The Seed roars across the eternal sky. “Hear this, disobedient spirits! You are banished! The door into the world of the time-creatures is closed to you…” Two fearsome beings—cherubim—come forward to guard the gateway.

Mission Not So Impossible

At last, the battle lines are drawn. The playing field has been leveled. The time-race is temporarily stripped of access to the eternal realm and prohibited from experiencing the power of union. The elohim are barred from the spatial world and confined to a region that has only one thing left in common with the earthly dimension, time. The two races are now locked in battle. The outcome will mean the ultimate destruction of all of the rebel elohim and a significant number of the time-creatures who embrace their rebellion; but most excitingly, it will result in the bringing together of all things in heaven and on earth a condition that has not been seen since the rebellion in the garden.

Perfume on the Latch

Even now the Creator is preparing an army of time-creatures, a human army, to bring an end to the elohim insurgency. He has put the responsibility for training in the hands of The Seed, Jesus. He is a combat veteran, a living lesson who has fought in the trenches facing and defeating death. He demonstrated by example the secret of a fully responsive spirit. He is skilled in the use of submission, the weaponry of this war.

Our first audio book episode on the Read Between the Worlds Podcast. We’re starting with our book Marriage Rx – Prescription for a radical marriage, by the Mayhews and the Tademas. There will be a total of six episodes, one episode for each chapter of the book. 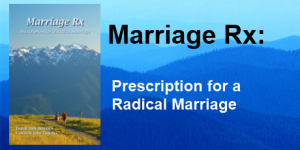 What is a covenant? Why is it so important to healthy marriages? Chapter 2 or Marriage Rx explores the meaning of covenant in our relationships.

Chapter three of Marriage Rx – Prescription for a radical marriage, has a provocative title, “Naked and Unashamed,” but it doesn’t have to do with clothing. Rather, it speaks to the importance of transparency in our relationship with God and one another. Welcome to the third installment of Read Between the Worlds audio book episodes. 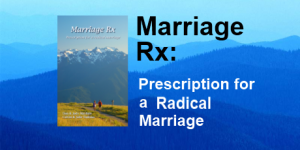 This chapter discusses one of the most important skills in any marriage: forgiving, being forgiven and practicing reconciliation. Far from the silly old aphorism, “love means never having to say your sorry” forgiveness is perhaps the most vital component of a loving relationship.

The way we relate together determines what kind of relationship we have. We experience and demonstrate oneness as we treat each other with love. This is the mystery of  merging two separate identities into one, and it only happens through the bond of love. Chapter 5 explores the kinds of relating in a marriage and how to discover the healthiest way of sharing identity.