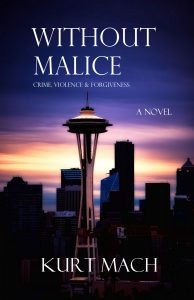 Soon to be released, a novel by Kurt Mach. Titled, Without Malice—Crime, Violence & Forgiveness. From the back cover:

Without Malice follows Will (Mark Wilson) as he moves seamlessly between the criminal underworld and conventional society, pursuing his desires without care for the consequences, only whether or not they work for him.

When love enters his life, his drive and passions refocus as he transitions from easy, but dangerous drug money to the excitement and stress of running one of Seattle’s hottest dance clubs. Near shootings at the night spot, and the discovery of a loaded gun in his company car reveal his inability to separate from his dark past.

And someone keeps showing up in his life of drugs, crime and partying… someone he cannot shake. His final confrontation brings it all to an abrupt end.