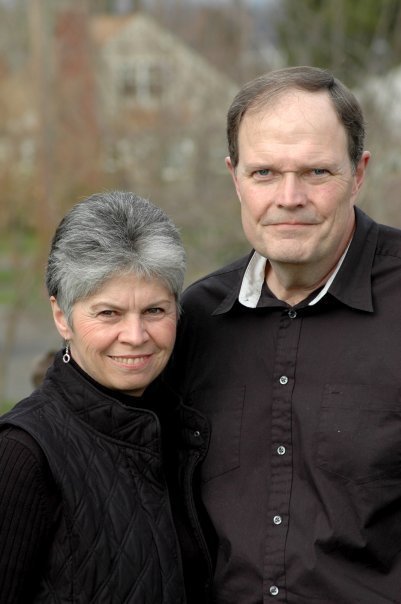 The Mayhews have been married 42 years. They have three grown children and five grandchildren. They began their journey with Christ on the first day of their married life with the help of a Gideon Bible in the honeymoon suite at Portland’s Benson Hotel. They have been exploring the life of a follower of Jesus, ever since.

Dan Mayhew is a former high school teacher. He holds a degree in communication and theater from Portland State University, and a MAT from Lewis and Clark College. After several years as a teacher, he served as associate pastor of a congregation of about 1200 in Portland, Oregon. In 1990, Dan began a community of home-based churches called The Summit Fellowships where he serves as a church planter, teacher and encourager.  In addition, he assists International Renewal Ministries by facilitating Pastor’s Prayer Summits throughout the Northwest and across the country in an effort to bring pastors of all denominations and traditions together for prayer. Dan has facilitated workshops related to house churches, and is requested as a speaker. He encourages Christians to reevaluate traditional methodology and structures in response to what he sees as the changing world of the American church.  He is also a writer and has been a regular humor columnist in several newspapers. Some of his columns are published in anthologies of humor.

Jody Mayhew has worked with women as a teacher and biblical counselor for over twenty-five years. For several years she served as the director of women’s ministries for a 1200 member congregation in Portland, Oregon, where she supervised a dozen women’s bible studies while continuing a fruitful teaching ministry and developing an equally productive counseling ministry. In affiliation with a local ministry, Jody served for seven years as a counselor with those who struggled with issues of sexual identity. Presently, Jody works with her husband, Dan, among a community of home-based churches called the Summit Fellowships. She is national women’s representative for International Renewal Ministries, and works as a facilitator of prayer summits for men and women in ministry. Jody teaches nationally and internationally at retreats and conferences. In 2010, she and a team of women, began Abide Ministries which presents schools of prayer, ministry and leadership worldwide.

Jody often teaches about developing intimacy with Jesus.  She is particularly interested in the woman’s role in the church and God’s call upon women to grow in Christ. She teaches a regular Bible study at at a local church, serves the women’s ministry and is available to the women of the congregation.

Together, Dan and Jody have authored two books from Two Worlds Press:  Sword of Submission – Reclaiming the Power of Being Human and Marriage RX – Prescription for a Radical Marriage (with Calvin and Julie Tadema).

Dan’s books in include The Butterfly and the Stone – A Father. A Son. God’s Love on a Prodigal Journey and numerous titles of short humor on the Max Features imprint.