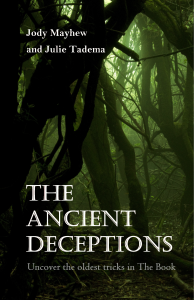 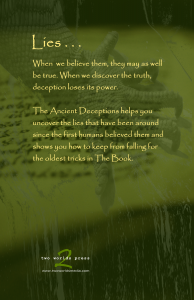 Soon to be released. Watch for it!

The Ancient Deceptions ~ Uncovering the Oldest Tricks in ‘The Book’

A fascinating exploration of the deceptions that have been plaguing the human race since the very beginning. From the back panel:

When we believe them, they may as well be true. When we discover the truth, deception loses its power.

The Ancient Deceptions helps you uncover the lies that have been around since the first humans believed them and shows you how to keep from falling for the oldest tricks in The Book.